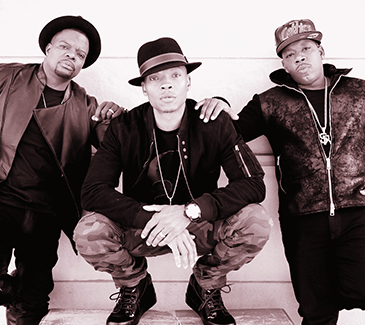 Bell Biv DeVoe scheduled to perform in the Grand Event Center on February 19, 2021 has been rescheduled to Saturday, October 9, 2021. Tickets purchased will be honored at the rescheduled date. For any further ticket inquiries, please reach out to the point of purchase.

Boasting their "hip-hop smoothed out on the R&B tip with a pop-feel-appeal to it," Bell Biv DeVoe spun off from New Edition following the parent group's tour in support of 1988's Heart Break. Ricky Bell, Michael Bivins, and Ronnie DeVoe, all original members of New Edition, complied with the urging of that album's producers, Jimmy Jam and Terry Lewis, and started fresh with a more street-oriented approach to contemporary R&B.

The trio enlisted a variety of producers for their debut, including Dr. Freeze, Hank and Keith Shocklee, and Eric Sadler, the latter three of whom had worked extensively with Public Enemy. The sound of that album, Poison, was quite unlike anything in New Edition's adolescent pop-R&B repertoire: the beats were funkier, the lyrics and vocals were overtly sexual, and there were only two ballads, both of which were buried on the second side. The title track topped the Billboard R&B/hip-hop chart, reached number three on the Hot 100, and eventually went platinum.