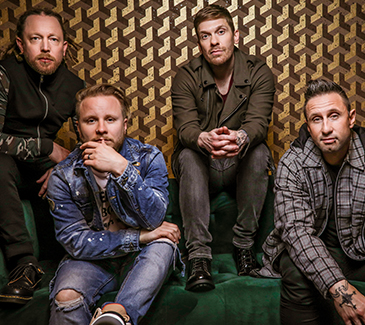 We regret to inform you that the Shinedown performance at Golden Nugget Lake Charles on Saturday, August 22, 2020 has been cancelled.

All tickets purchased via phone or online at AXS.com will be automatically refunded to each guest’s credit card used for payment. Ticketholders who purchased tickets onsite at Golden Nugget Lake Charles may visit our Box Office with their purchase receipts during regular operating hours to obtain a refund. Casino reservations for this show will be automatically cancelled.

For those guests who have already purchased tickets: your existing tickets and seats for this concert will remain valid on the new show date. If you can attend the concert on the rescheduled date of August 22nd, you do not need to take any action.

We will issue further communication as the rescheduled date approaches for our casino reserved guests.

Leading the charge for 21st century rock, multi-platinum, record-breaking band Shinedown has sold more than 10 million albums worldwide, earned 11 platinum and gold singles and four platinum and gold albums, and amassed more than 1.5 billion total overall streams to date. Each of Shinedown's singles released throughout their career have reached the Top 5 on Billboard’s Mainstream Rock Songs Chart – an unparalleled feat.

The chart-topping band’s latest album yet, ATTENTION ATTENTION uproots convention and delivers a personal, poignant, and powerful body of work that evolves from ruin to reclamation to revelation. As anxieties dissipate and demons disappear, an enduring statement about the resolve of the human spirit emerges, as seen on tracks like the #1 rock radio hits “GET UP” and “DEVIL.”